The Austin International Poetry Festival is renowned as one of the world’s poetic melting pots, bringing together a diverse and exciting mix of voices. Texas 2 London takes you into the thick of the action with a live video link from Merton’s Colour House Theatre.

At 7pm we’ll have an offline open mic, with three participants selected to take part in the video-linked section of the evening starting at 8pm, when our guest poets (Matt Black, Agnes Meadows, Kayo Chingonyi) will be trading poems with some of Austin’s finest.

Brought to you by OpenHaus Arts with support from Merton Council's Arts Development Fund. Hosted by Robin Vaughan-Williams and Project Adorno.

Matt Black
Matt Black writes poems for adults and children, has lived in Sheffield for 25 years, and has 2 grown-up children. His collections are Swimmer, Goblin In The Fridge, Footsteps and Fuddles (Derbyshire Laureate poems), and The Owl and the Pussycat and the Turtles of Fun (prequel and sequel to The Owl and the Pussycat). He has set a World Record (unofficial) performing in 50 venues in 5 hours on a tandem bicycle. He invented the world’s first Poetry Jukebox which he uses regularly at festivals and schools, and created (with Jonny White, sculptor) the Fanti-Elastical ZingZong Poetry Imagination Machine.

Agnes Meadows
Agnes Meadows is a London-based award-winning poet/writer, who has toured nationally and internationally, giving readings, workshops, and residencies all over the world, and was a featured poet at the Austin International Poetry Festival for 10 consecutive years. Agnes has five collections of poetry (Flipped Eye/Waterways), with a new collection coming out in early 2015. She also runs Loose Muse Women’s Writers night in central London, which celebrated its 10th birthday last September, and which has regular satellite events in other parts of England. Agnes has also advised Chanel 4 on poetry, and is a board member of the Poetry Book Society.

Kayo Chingonyi
Known for his captivating performances, Kayo Chingonyi was born in Zambia in 1987, and moved to the UK in 1993. His poems have been published in a range of magazines and anthologies and in a debut pamphlet entitled Some Bright Elegance (Salt Publishing, 2012). In 2013 he was awarded a writing residency at Cove Park (Scotland) as well as the Geoffrey Dearmer Prize from the Poetry Society. He is a fellow of the Complete Works programme for advanced Black and Asian Poets and has been invited to give readings and performances around the world.

Hosted by James Jacobs and Thom the World Poet.

Teresa Y Roberson Teresa Y Roberson is a maths/science teacher, published fiction writer, spoken word poet, and organiser of the Austin Writers' Roulette. She wears different wigs, depending upon the event theme. Roberson’s writing draws on her survival skills honed through working and traveling internationally, her love of theoretical physics and ethnic food, and battling against society’s preconceived box for women.

Dave Weber (Mr Dave) Dave Weber lives in Austin, Texas. He has been publishing poetry since he was 8 years old, and is the 2014 AIPF slam poetry champ. Currently, Mr Dave is very busy trying to do all the things, and wishes that you all would do the same.

The Texas 2 London open mic starts at 7pm and slots are a maximum of three minutes. Turn up early, between 6.30 and 7pm, to sign up for a slot.

The audience will get to vote for their favourite poets from the open mic, and the top three will then be offered another 3-minute spot during the second part of the evening (starting at 8pm), when they'll be able to perform their work alongside the headliners to audiences both in Merton and at the Austin International Poetry Festival via the video link.

How to find the Colour House Theatre

The Colour House Theatre is a few minutes walk from Colliers Wood Underground station on the Northern Line. It's situated in Merton Abbey Mills by the River Wandle, with several cafes and restaurants nearby. There will be a bar in the Theatre box office.

Find us on Google Maps.

To get to the Theatre from the Underground station, turn left out of the station and walk down High Street Colliers Wood until you're outside the pedestrian entrance to Sainsbury's. Instead of crossing the footbridge to the supermarket, turn right onto the path that follows the River Wandle. At the end of the path you do a little right-then-left to cross over a main road (Merantum Way). Continue on the path beside the river, and almost immediately on the left there's a footbridge over the river into Merton Abbey Mills. The Colour House is one of the first buildings you'll see.

A Short History of Skype Nights

The concept of a Skype night began with a Skype poetry set Robin put on for Life 2.0 at Access Space in October 2008 for Off the Shelf Festival in Sheffield. 'Skype love' interwove poems about love and communications with appearances by writers in London, Montana, and Reykjavík. Then in May 2011 this was developed into the concept for a whole evening at Word of Mouth: Nottingham and the World, with writers appearing from as far away as Mumbai, Auckland, and Pennsylvania. Follow-up events occurred in Sheffield, October 2011, and in Nottingham, October 2014. 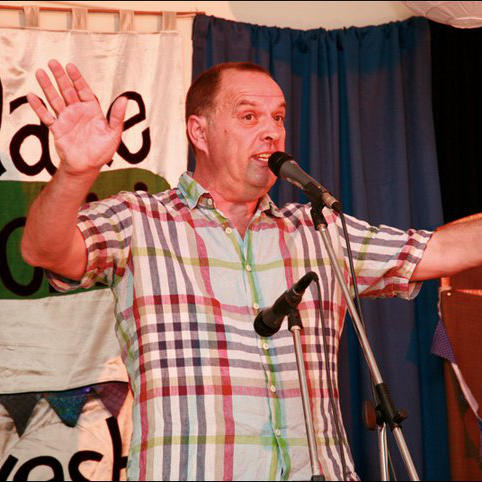 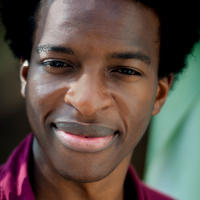 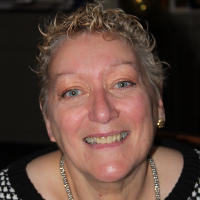 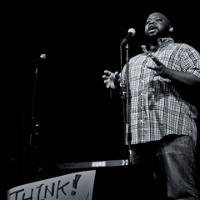 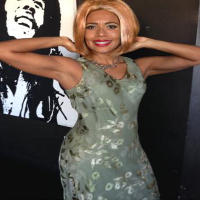 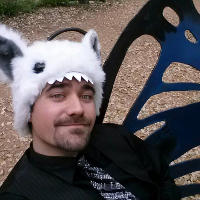 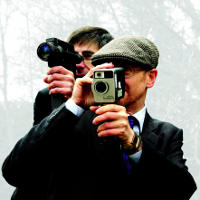 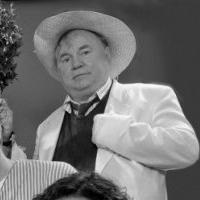 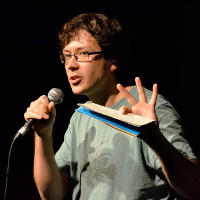